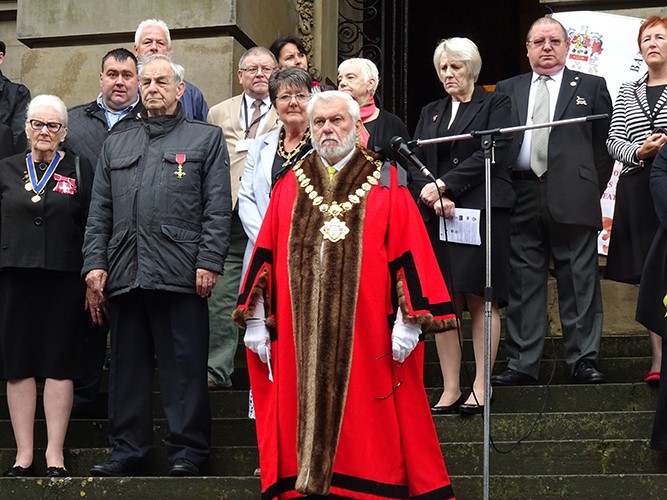 Welcome to Morley Town Council’s new website. I am delighted and honoured to have been voted as Mayor once again, having filled this role previously in 2006. The Mayoress and I, having taught all our working lives in Morley Schools and played an active part in many of the town’s societies and charity organisations, are pleased to have the opportunity to serve its people.

Our Historic Market Town, unlike many of its surrounding towns and cities, is thriving, and certainly since the town council’s inception in 2000, has greatly improved the whole of the Town Council area.

I often hear the words “well Morley is different” and yes we are. The independent spirit of its people, the  enthusiasm of ordinary folk in our town to undertake voluntary work to make things happen, is worthy of note.

Who would have thought ten years ago that Morley would have its own Literature Festival now developed into an Arts Festival? That the Leeds\Morley Branch of the Royal Society of St. George would deliver a huge parade of nearly 1000 people and have thousands of people attending the festivities held at the Rugby and Cricket grounds. Its success gained the Town the accolade in the Daily Mail newspaper as being the “most patriotic Town in England”. The Brass Band competition continues to attract more and more bands and it is good to see our Town celebrating its musical heritage.

This year has enabled us to celebrate the 50th anniversary of our Civic Twinning with the German town of Siegen. The celebration included a delegation of 30 senior citizens and the present and former Lord Mayors of Siegen.

On Friday 16th June at 7.30am on the Town Hall steps, in the pouring rain, we commemorated the time 100 years ago when the Leeds Pals went over the top at the Battle of the Somme.  800 men were killed that morning! This was followed by a commemoration service at the Central Methodist church where the congregation was joined by pupils from our 17 schools. After the service the pupils paraded down to the Town Hall where they planted small wooden crosses in the garden of remembrance.

The Queen’s 90th birthday was celebrated in style with numerous activities. A Picnic concert in the Town Hall, guides & scout celebrations and Christian Aid and Save the Children committees Fund raising Concert, were but a few.

This year our Council decided that after sixteen years we should employ an expert to have a look at how Morley Town Council operates and how it serves its people. We employed Chris Geeson, Past Chairman and Past President of SLCC. The Town Council and its officers received a glowing report and concluded that “the council is competently managed and maximises full benefit from its limited resources”.

Finally, I wish to give credit to the 26 Councillors all of whom work voluntarily receiving no allowance or expenses for the work they do. They are assisted by the people of our town who work alongside them to make our town a better place in which to live.

It is this partnership that makes Morley different.

Long may it continue!